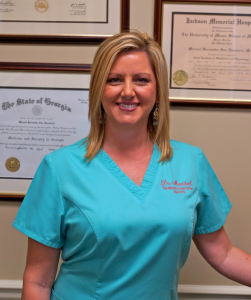 Dr. Marisol San Inocencio opened The Woman’s Care Center in 2000 and it has been an essential part of Milledgeville’s health community ever since.

Originally from Puerto Rico, Dr. San Inocencio came to the states for her pre-med at the University of Wisconsin and later pursued her doctorate at the Pennsylvania State University College of Medicine in Hershey, Pa. After that, she completed her residency in obstetrics and gynecology at the University of Miami, Jackson Memorial Hospital. In 1999 she was offered a job in Milledgeville with a group of doctors. In less than a year, she became independent, and The Woman’s Care Center was created. After 20 years of hard work and sacrifices as a solo practitioner, Dr. San Inocencio now owns a very busy practice.